While the primary use of cashew oil is on the skin, it can also be an excellent oil to include in your hair care regimen. Specifically, for a healthier scalp.

If you’ve been searching for a new carrier oil to try out in your hair care regimen, then cashew oil might just be the one your hair is looking for.

Cashew oil is an uncommon carrier oil that’s surprisingly rich in vitamins and minerals that are beneficial to the hair and skin.

What is Cashew Oil?

Cashew (Anacardium occidentale) oil is derived from the nuts of the cashew tree which grows in tropical regions of the world – Brazil, Venezuela, and parts of Asia and Africa. Cashew is aka caju, acaju, and cashew apple.

As a child, I remember climbing the cashew tree behind our house and plucking the different colored cashews. They were extremely delicious and tangy.

It never occurred to me that the shells we threw away after eating could be used to produce oil as well.

The nuts are shelled and then dried followed by cold-pressing the oil from the nuts after removing the skin. Removing the skin is important as the external layers are toxic to humans.

Cashew oil is a high-quality edible oil that’s considered one of the healthy oils for cooking. Cashew oil is a pale to golden yellow with a nutty aroma and taste.

Cashew nuts can be consumed as a snack and can also be used in curries, jams, sauces, and other dishes that call for nuts.

The nuts can also be processed into cashew cheese, cashew milk, and cashew nut butter.

Due to the high selenium content in cashew oil, consistent use on skin leads to smoother texture and moisture for dry and stressed skin.

Another crucial antioxidant in cashew oil, vitamin E provides additional benefits to the skin texture and ridding the skin of free radicals and premature aging.

There have been various studies that show vitamin E oil has great antioxidant benefits on the hair and skin.

The high copper content in cashew oil encourages the production of melanin on the scalp, which in turn discourages premature greying of hair.

Cashew oil can be used in a body massage oil to help relax the senses and revive the suppleness, glow, and smoothness of the skin.

How To Use Cashew Oil

How to Grow Your Hair Healthy Long with Natural Oils

Recover from Hair Loss with The Ultimate Hair Growth Guide

Can You Cook With Cashew Oil?

Yes, you can cook with cashew oil. It is considered one of the healthiest oils and is ideal for frying food and replacing other types of oils in your recipes.

Keep in mind, that the smoking point for cashew oil is 400°C. Heating beyond this point will degrade the oil.

You need cashew oil, jojoba oil, sweet almond oil, sesame seed oil, and rosemary essential oil for this scalp oil (exact measurements in the how to card below).

Open an applicator bottle and add all the carrier oils and essential oil. Close and shake thoroughly.

To use, the day before shampoo and deep conditioning, apply the oil generously to your scalp and massage until absorbed.

Twist and pin up your hair. Cover with a disposable cap and leave in overnight. Shampoo and deep condition the next morning. Use once a week for best results.

Where To Buy Cashew Oil?

Below are my top recommendations for pure and natural cashew oil you use for oil and skin.

What Can Cashew Nuts Be Used For?

You can also get the benefits of cashew by adding cashew nuts to your diet in moderation.

Cashew nuts can be used to make a variety of delicacies. Most common cashew nut dishes include:-

Basically, any dish that calls for nuts, you can use cashew nuts. Or you can get adventurous and try to include it in different ways in your diet.

You can also get really creative with southeast Asian soups and curries here too!

What does this mean? Cashew oil will optimize your scalp health.

And with a healthy scalp, you can be sure maximum hair growth potential will be achieved. Cashew oil also gives hair a smooth and shiny texture.

Cashew oil is not poisonous. However, there is another type of oil derived from cashew known as cashew shell nut oil (CSNO).

Do not ingest this oil and ensure you’re purchasing the right kind of cashew oil for hair and skin.

What Are the Side Effects of Cashew Oil?

Though cashews are a less frequent allergen than tree nuts and peanuts, it is still possible to have allergic reactions.

If you are allergic to any type of nut, it’s best to avoid cashew oil altogether. You can find alternative carriers oil in the Carrier Oils Archives. 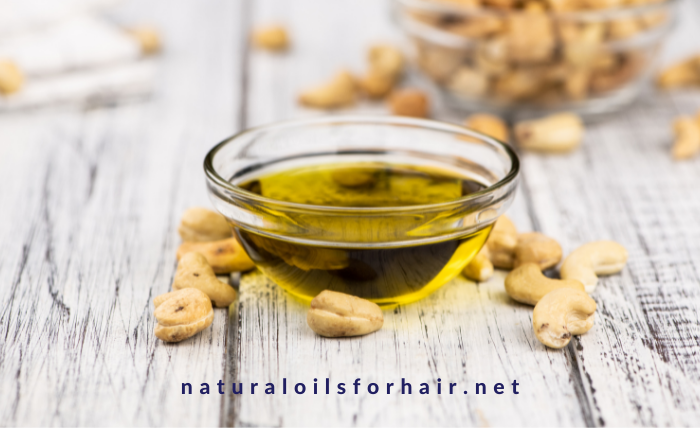 Abi is a curly hair expert who delved into the world of natural oils after severe hair loss issues. Through her research, study, and testing, she was able to regrow her bald spots & a healthy head of hair. She is the founder of Healthy Natural Hair Products & Ade Ori Hair Care, and the author of the successful Healthy Hair Care Series. She continues to study hair science, Ayurveda, and natural solutions for healthy hair and skin. Learn more HERE…