Burdock root oil is one of the best natural oils to use for recovering from hair loss issues as it especially addresses scalp issues.

Burdock root oil was also featured prominently in How to Grow Your Hair Healthy & Long with Natural Oils.

What is Burdock Root Oil Good For?

When it comes to optimal hair and scalp health, burdock root is one of the great natural oils, especially for the treatment of thinning hair.

There’s a good reason I featured it prominently in How to Grow Your Hair Healthy and Long with Natural Oils.

When I was suffering from hair loss issues, burdock root oil was one of the oils that helped me regrow my hair.

In addition to recovering from thinning areas of the scalp, burdock root oil can help with eliminating scalp irritation issues.

Can Burdock Root Be Eaten?

In Japan, burdock root is used in the preparation of kinpira gobō (sauteed burdock root, carrot, and daikon) as well as burdock makizushi (rolled sushi filled with pickled burdock root).

As you can see, the burdock root can be safely consumed following the usual food safety guidelines. Check out some burdock root recipes below:-

If you have any major health conditions though, you should check with your primary care physician before you start consuming burdock root.

For this recipe, you a few sticks of dried or fresh burdock root, olive oil, and a sterile glass jar like this one.

Scrub off the dirt on the dried burdock root, then chop it into little pieces. Place the chopped pieces into the glass jar.

Fill up the jar with olive oil. The exact measurements depend on how big the glass jar is. Close the jar and place it in a dark cabinet.

Let the mixture infuse for up to 6 weeks while the goodness sips out of the burdock roots. Open up the jar every week to release the air bubbles that build up inside and give the jar a shake.

After 6 weeks, strain the mix through a cheesecloth and discard the roots. Pour the burdock root oil into a dark bottle like this one and store it in a cool area.

Chop the fresh root into little pieces and spread them out on a large tray.

Leave the tray out in the sun for 1 – 2 days so the moisture in the fresh root evaporates. You can also pound the roots a little before spreading them out on the tray.

Where to Buy Dried Burdock Root?

You can find dried burdock root at your local herb store or purchase it online at the following retailers:-

If you’re a bit of a gardener, you can grow your own burdock plants too.

Using fresh or dried burdock root doesn’t affect the potency of the end result as long as you follow the directions.

It is advised that diabetics and women who are pregnant or breastfeeding consult a physician before using burdock root oil. 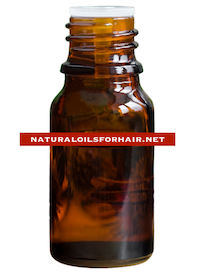 This recipe uses dried burdock root. For fresh burdock root, scroll up and check the article

I earn from qualifying purchases through my links at no extra cost to you. Thanks for your support!

Pin how to make burdock root oil for later and follow me on Pinterest for more hair, health, fitness, and beauty tips, freebies, and resources.

Abi is a natural curly girl who delved into the world of natural oils after severe hair loss issues. Through her research & testing, she was able to regrow her bald spots & a healthy head of hair. She is also the founder of Healthy Natural Hair Products & Ade Ori Hair Care as well as the writer of the Healthy Hair Care Series. Learn more HERE…

Question for you...since Black Castor Oil is also good for your hair, could you infuse the burdock root into the Castor Oil instead? Double your bang for the buck? Seems like that would be an amazing combo. Or maybe half castor and half olive? I'm thinking other options might be hazelnut or amla? Currently, I mix hazelnut, amla and castor oil with a few essential oils for my hair oil; thinking adding burdock root would push this way over the top!

There is too much of a good thing. Mixing black castor oil and plain castor oil might be overdoing it. Mixing castor oil and olive oil is fine depending on your hair goals. Adding burdock root oil to your current mix is a good combination.